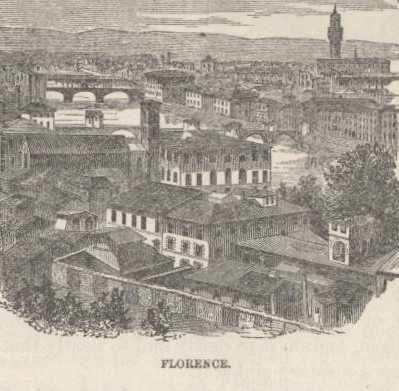 Florence pleased us for a while. I think we appreciated the great figure of David in the grand square, and the sculptured group they call the Rape of the Sabines. We wandered through the endless collections of paintings and statues of the Pitti and Ufizzi galleries, of course. I make that statement in self-defense; there let it stop. I could not rest under the imputation that I visited Florence and did not traverse its weary miles of picture galleries. We tried indolently to recollect something about the Guelphs and Ghibelines and the other historical cut-throats whose quarrels and assassinations make up so large a share of Florentine history, but the subject was not attractive. We had been robbed of all the fine mountain scenery on our little journey by a system of railroading that had three miles of tunnel to a hundred yards of daylight, and we were not inclined to be sociable with Florence. We had seen the spot, outside the city somewhere, where these people had allowed the bones of Galileo to rest in unconsecrated ground for an age because his great discovery that the world turned around was regarded as a damning heresy by the church; and we know that long after the world had accepted his theory and raised his name high in the list of its great men, they had still let him rot there. That we had lived to see his dust in honored sepulture in the church of Santa Croce we owed to a society of literati, and not to Florence or her rulers. We saw Dante’s tomb in that church, also, but we were glad to know that his body was not in it; that the ungrateful city that had exiled him and persecuted him would give much to have it there, but need not hope to ever secure that high honor to herself. Medicis are good enough for Florence. Let her plant Medicis and build grand monuments over them to testify how gratefully she was wont to lick the hand that scourged her.

We went to the Church of Santa Croce, from time to time, in Florence, to weep over the tombs of Michael Angelo, Raphael and Machiavelli, (I suppose they are buried there, but it may be that they reside elsewhere and rent their tombs to other parties--such being the fashion in Italy,) and between times we used to go and stand on the bridges and admire the Arno. It is popular to admire the Arno. It is a great historical creek with four feet in the channel and some scows floating around. It would be a very plausible river if they would pump some water into it. They all call it a river, and they honestly think it is a river, do these dark and bloody Florentines. They even help out the delusion by building bridges over it. I do not see why they are too good to wade. How the fatigues and annoyances of travel fill one with bitter prejudices sometimes! I might enter Florence under happier auspices a month hence and find it all beautiful, all attractive. But I do not care to think of it now, at all, nor of its roomy shops filled to the ceiling with snowy marble and alabaster copies of all the celebrated sculptures in Europe--copies so enchanting to the eye that I wonder how they can really be shaped like the dingy petrified nightmares they are the portraits of. I got lost in Florence at nine o’clock, one night, and staid lost in that labyrinth of narrow streets and long rows of vast buildings that look all alike, until toward three o’clock in the morning. It was a pleasant night and at first there were a good many people abroad, and there were cheerful lights about. Later, I grew accustomed to prowling about mysterious drifts and tunnels and astonishing and interesting myself with coming around corners expecting to find the hotel staring me in the face, and not finding it doing any thing of the kind. Later still, I felt tired. I soon felt remarkably tired. But there was no one abroad, now--not even a policeman. I walked till I was out of all patience, and very hot and thirsty. At last, somewhere after one o’clock, I came unexpectedly to one of the city gates. I knew then that I was very far from the hotel. The soldiers thought I wanted to leave the city, and they sprang up and barred the way with their muskets. I said: “Hotel d’Europe!” It was all the Italian I knew, and I was not certain whether that was Italian or French. The soldiers looked stupidly at each other and at me, and shook their heads and took me into custody. I said I wanted to go home. They did not understand me. They took me into the guard-house and searched me, but they found no sedition on me. They found a small piece of soap (we carry soap with us, now,) and I made them a present of it, seeing that they regarded it as a curiosity. I continued to say Hotel d’Europe, and they continued to shake their heads, until at last a young soldier nodding in the corner roused up and said something. He said he knew where the hotel was, I suppose, for the officer of the guard sent him away with me. We walked a hundred or a hundred and fifty miles, it appeared to me, and then he got lost. He turned this way and that, and finally gave it up and signified that he was going to spend the remainder of the morning trying to find the city gate again. At that moment it struck me that there was something familiar about the house over the way. It was the hotel! It was a happy thing for me that there happened to be a soldier there that knew even as much as he did; for they say that the policy of the government is to change the soldiery from one place to another constantly and from country to city, so that they can not become acquainted with the people and grow lax in their duties and enter into plots and conspiracies with friends. My experiences of Florence were chiefly unpleasant. I will change the subject.

Magnanimous Florence! Her jewelry marts are filled with artists in mosaic. Florentine mosaics are the choicest in all the world. Florence loves to have that said. Florence is proud of it. Florence would foster this specialty of hers. She is grateful to the artists that bring to her this high credit and fill her coffers with foreign money, and so she encourages them with pensions. With pensions! Think of the lavishness of it.