The ship is lying here in the harbor of Naples--quarantined. She has been here several days and will remain several more. We that came by rail from Rome have escaped this misfortune. Of course no one is allowed to go on board the ship, or come ashore from her. She is a prison, now. The passengers probably spend the long, blazing days looking out from under the awnings at Vesuvius and the beautiful city--and in swearing. Think of ten days of this sort of pastime!--We go out every day in a boat and request them to come ashore. It soothes them. We lie ten steps from the ship and tell them how splendid the city is; and how much better the hotel fare is here than any where else in Europe; and how cool it is; and what frozen continents of ice cream there are; and what a time we are having cavorting about the country and sailing to the islands in the Bay. This tranquilizes them. 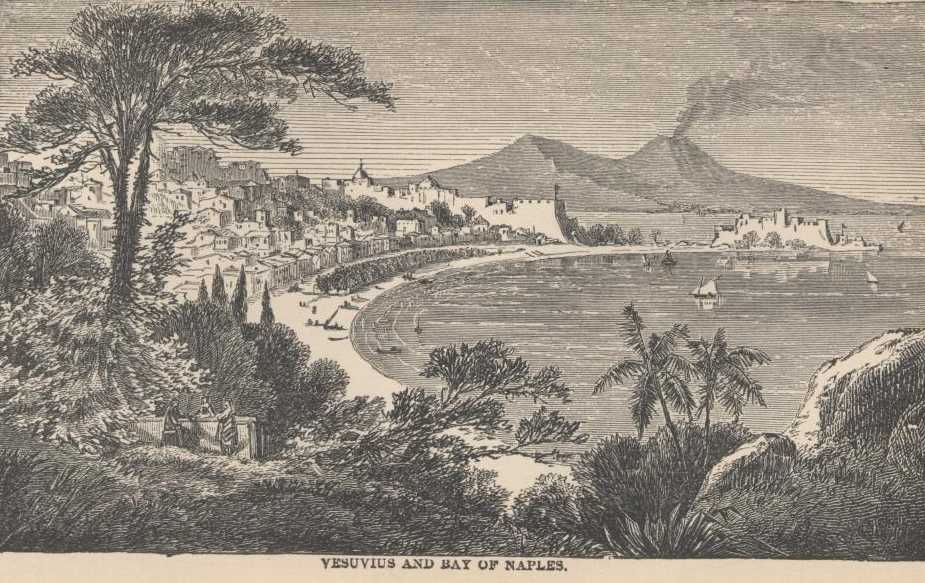 There was to be eight of us in the party, and we were to leave Naples at midnight. We laid in some provisions for the trip, engaged carriages to take us to Annunciation, and then moved about the city, to keep awake, till twelve. We got away punctually, and in the course of an hour and a half arrived at the town of Annunciation. Annunciation is the very last place under the sun.

An Observation of the Upper Crust of Naples Erminia Frezzolini at the Theatre of San Carlo.

I made slow headway at first, but I began to get dissatisfied at the idea of paying my minion five francs to hold my mule back by the tail and keep him from going up the hill, and so I discharged him. I got along faster then. We had one magnificent picture of Naples from a high point on the mountain side. We saw nothing but the gas lamps, of course--two-thirds of a circle, skirting the great Bay--a necklace of diamonds glinting up through the darkness from the remote distance--less brilliant than the stars overhead, but more softly, richly beautiful--and over all the great city the lights crossed and recrossed each other in many and many a sparkling line and curve. And back of the town, far around and abroad over the miles of level campagna, were scattered rows, and circles, and clusters of lights, all glowing like so many gems, and marking where a score of villages were sleeping. About this time, the fellow who was hanging on to the tail of the horse in front of me and practicing all sorts of unnecessary cruelty upon the animal, got kicked some fourteen rods, and this incident, together with the fairy spectacle of the lights far in the distance, made me serenely happy, and I was glad I started to Vesuvius.

At the Hermitage we were about fifteen or eighteen hundred feet above the sea, and thus far a portion of the ascent had been pretty abrupt. For the next two miles the road was a mixture--sometimes the ascent was abrupt and sometimes it was not: but one characteristic it possessed all the time, without failure--without modification--it was all uncompromisingly and unspeakably infamous. It was a rough, narrow trail, and led over an old lava flow--a black ocean which was tumbled into a thousand fantastic shapes--a wild chaos of ruin, desolation, and barrenness--a wilderness of billowy upheavals, of furious whirlpools, of miniature mountains rent asunder--of gnarled and knotted, wrinkled and twisted masses of blackness that mimicked branching roots, great vines, trunks of trees, all interlaced and mingled together: and all these weird shapes, all this turbulent panorama, all this stormy, far-stretching waste of blackness, with its thrilling suggestiveness of life, of action, of boiling, surging, furious motion, was petrified!--all stricken dead and cold in the instant of its maddest rioting!--fettered, paralyzed, and left to glower at heaven in impotent rage for evermore!

Finally we stood in a level, narrow valley (a valley that had been created by the terrific march of some old time irruption) and on either hand towered the two steep peaks of Vesuvius. The one we had to climb--the one that contains the active volcano--seemed about eight hundred or one thousand feet high, and looked almost too straight-up-and-down for any man to climb, and certainly no mule could climb it with a man on his back. Four of these native pirates will carry you to the top in a sedan chair, if you wish it, but suppose they were to slip and let you fall,--is it likely that you would ever stop rolling? Not this side of eternity, perhaps. We left the mules, sharpened our finger-nails, and began the ascent I have been writing about so long, at twenty minutes to six in the morning. The path led straight up a rugged sweep of loose chunks of pumice-stone, and for about every two steps forward we took, we slid back one. It was so excessively steep that we had to stop, every fifty or sixty steps, and rest a moment. To see our comrades, we had to look very nearly straight up at those above us, and very nearly straight down at those below. We stood on the summit at last--it had taken an hour and fifteen minutes to make the trip.

After browsing among the stately ruins of Rome, of Baiae, of Pompeii, and after glancing down the long marble ranks of battered and nameless imperial heads that stretch down the corridors of the Vatican, one thing strikes me with a force it never had before: the unsubstantial, unlasting character of fame. Men lived long lives, in the olden time, and struggled feverishly through them, toiling like slaves, in oratory, in generalship, or in literature, and then laid them down and died, happy in the possession of an enduring history and a deathless name. Well, twenty little centuries flutter away, and what is left of these things? A crazy inscription on a block of stone, which snuffy antiquaries bother over and tangle up and make nothing out of but a bare name (which they spell wrong)—no history, no tradition, no poetry—nothing that can give it even a passing interest. What may be left of General Grant’s great name forty centuries hence? This—in the Encyclopedia for A. D. 5868, possibly:

“URIAH S. (or Z.) GRAUNT—popular poet of ancient times in the Aztec provinces of the United States of British America. Some authors say flourished about A. D. 742; but the learned Ah-ah Foo-foo states that he was a cotemporary of Scharkspyre, the English poet, and flourished about A. D. 1328, some three centuries after the Trojan war instead of before it. He wrote ‘Rock me to Sleep, Mother.’” These thoughts sadden me. I will to bed.

“See Naples and die.” Well, I do not know that one would necessarily die after merely seeing it, but to attempt to live there might turn out a little differently. To see Naples as we saw it in the early dawn from far up on the side of Vesuvius, is to see a picture of wonderful beauty. At that distance its dingy buildings looked white--and so, rank on rank of balconies, windows and roofs, they piled themselves up from the blue ocean till the colossal castle of St.

The Streets of Naples

The streets are generally about wide enough for one wagon, and how they do swarm with people! It is Broadway repeated in every street, in every court, in every alley! Such masses, such throngs, such multitudes of hurrying, bustling, struggling humanity! We never saw the like of it, hardly even in New York, I think. There are seldom any sidewalks, and when there are, they are not often wide enough to pass a man on without caroming on him. So everybody walks in the street--and where the street is wide enough, carriages are forever dashing along.

I was looking at a magnificent marble staircase in the King’s palace, the other day, which, it was said, cost five million francs, and I suppose it did cost half a million, may be. I felt as if it must be a fine thing to live in a country where there was such comfort and such luxury as this. And then I stepped out musing, and almost walked over a vagabond who was eating his dinner on the curbstone--a piece of bread and a bunch of grapes.

And thus the wonderful Blue Grotto is suggested to me. It is situated on the Island of Capri, twenty-two miles from Naples. We chartered a little steamer and went out there. Of course, the police boarded us and put us through a health examination, and inquired into our politics, before they would let us land. The airs these little insect Governments put on are in the last degree ridiculous. They even put a policeman on board of our boat to keep an eye on us as long as we were in the Capri dominions. They thought we wanted to steal the grotto, I suppose. It was worth stealing.

What we saw there was simply a circular crater--a circular ditch, if you please--about two hundred feet deep, and four or five hundred feet wide, whose inner wall was about half a mile in circumference. In the centre of the great circus ring thus formed, was a torn and ragged upheaval a hundred feet high, all snowed over with a sulphur crust of many and many a brilliant and beautiful color, and the ditch inclosed this like the moat of a castle, or surrounded it as a little river does a little island, if the simile is better.

The Buried City of Pompeii

They pronounce it Pom-pay-e. I always had an idea that you went down into Pompeii with torches, by the way of damp, dark stairways, just as you do in silver mines, and traversed gloomy tunnels with lava overhead and something on either hand like dilapidated prisons gouged out of the solid earth, that faintly resembled houses. But you do nothing the kind.