Enroute to Leghorn, Twain spent several hours in Pisa, visiting the Leaning Tower and the Duomo and Baptistery. He revisited Pisa in 1892 with his family. Leghorn (Livorno), a port o'call for the Quaker City, where Twain rejoined the ship. He missed an opportunity to visit Giuseppe Garibaldi, who was on a nearby island.  Twain's party boards the Quaker City but they do not depart Leghorn aboard her. 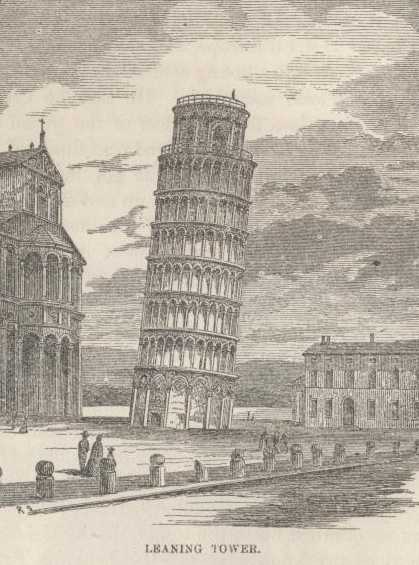 The line skirts the N. bank of the Arno passing the Cascine and numerous villas. Beyond stat. S. Donnino the valley of the Arno expands. Stat. Signa with its gray pinnacles and towers is celebrated for its straw-plaiting establishment. The line intersects undulating vineyards, crosses the Ombrone, which falls into the Arno, and enters the defile of the Gonfolina which separates the middle from the lower valley of the Arno. Stat. Montelupo is approached by an iron bridge across the Arno. Beyond it the Villa Ambrogiana is visible on the r., founded by Ferdinand I. on the site of an old castle of the Ardinghelli. Then crossing the small river Pesa the train reaches

Stat. Empoli, a small town (6000 inhab.) with antique buildings and narrow streets, situated in a fertile district. Here the line to Siena diverges to the S. The following stations are S. Pierino, S. Romano and La Rotta. To the r. rise the Apennines; to the 1. on the height San Miniato dei Tedeschi, a small town which the emp. Frederick II. in 1226 elevated to the rank of the seat of the Vicar of the empire. Stat. Pontedera at the influx of the Era into the Arno, where the road to Volterra diverges. Stat. Cascina on the Arno, where on the day of S. Vittorio, July 28th, 1364, the Pisans were defeated by the Florentines. Stat. Navacchio; to the r. the Monti Pisani with the ruins of a castle on the summit of Verruca.

The railway from Pisa to Leghorn traverses flat meadow land intersected by cuttings and near Leghorn crosses the Arno-Canal.

We reached Leghorn in time to see all we wished to see of it long before the city gates were closed for the evening, and then came on board the ship.

We felt as though we had been away from home an age. We never entirely appreciated, before, what a very pleasant den our state-room is; nor how jolly it is to sit at dinner in one’s own seat in one’s own cabin, and hold familiar conversation with friends in one’s own language. Oh, the rare happiness of comprehending every single word that is said, and knowing that every word one says in return will be understood as well! We would talk ourselves to death, now, only there are only about ten passengers out of the sixty-five to talk to. The others are wandering, we hardly know where. We shall not go ashore in Leghorn. We are surfeited with Italian cities for the present, and much prefer to walk the familiar quarterdeck and view this one from a distance.

The stupid magnates of this Leghorn government can not understand that so large a steamer as ours could cross the broad Atlantic with no other purpose than to indulge a party of ladies and gentlemen in a pleasure excursion. It looks too improbable. It is suspicious, they think. Something more important must be hidden behind it all. They can not understand it, and they scorn the evidence of the ship’s papers. They have decided at last that we are a battalion of incendiary, blood-thirsty Garibaldians in disguise! And in all seriousness they have set a gun-boat to watch the vessel night and day, with orders to close down on any revolutionary movement in a twinkling! Police boats are on patrol duty about us all the time, and it is as much as a sailor’s liberty is worth to show himself in a red shirt. These policemen follow the executive officer’s boat from shore to ship and from ship to shore and watch his dark maneuvers with a vigilant eye. They will arrest him yet unless he assumes an expression of countenance that shall have less of carnage, insurrection and sedition in it. A visit paid in a friendly way to General Garibaldi yesterday (by cordial invitation,) by some of our passengers, has gone far to confirm the dread suspicions the government harbors toward us. It is thought the friendly visit was only the cloak of a bloody conspiracy. These people draw near and watch us when we bathe in the sea from the ship’s side. Do they think we are communing with a reserve force of rascals at the bottom?

It is said that we shall probably be quarantined at Naples. Two or three of us prefer not to run this risk. Therefore, when we are rested, we propose to go in a French steamer to Civita and from thence to Rome, and by rail to Naples. They do not quarantine the cars, no matter where they got their passengers from.