In due time the shores of Italy were sighted, and as we stood gazing from the decks, early in the bright summer morning, the stately city of Genoa rose up out of the sea and flung back the sunlight from her hundred palaces. Here we rest for the present—or rather, here we have been trying to rest, for some little time, but we run about too much to accomplish a great deal in that line.

The Women of Genoa 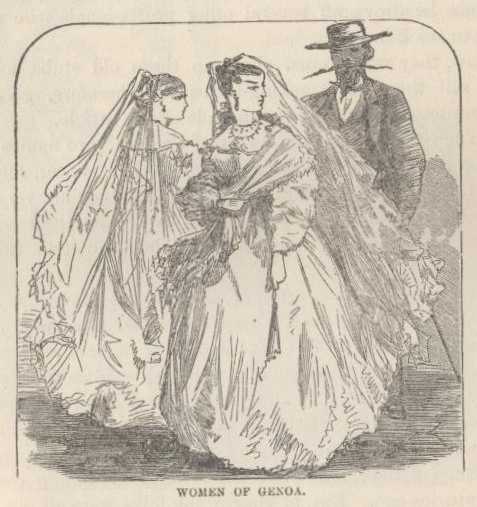 I would like to remain here. I had rather not go any further. There may be prettier women in Europe, but I doubt it. The population of Genoa is 120,000; two-thirds of these are women, I think, and at least two-thirds of the women are beautiful. They are as dressy and as tasteful and as graceful as they could possibly be without being angels. However, angels are not very dressy, I believe. At least the angels in pictures are not—they wear nothing but wings. But these Genoese women do look so charming. Most of the young demoiselles are robed in a cloud of white from head to foot, though many trick themselves out more elaborately. Nine-tenths of them wear nothing on their heads but a filmy sort of veil, which falls down their backs like a white mist. They are very fair, and many of them have blue eyes, but black and dreamy dark brown ones are met with oftenest. The ladies and gentlemen of Genoa have a pleasant fashion of promenading in a large park on the top of a hill in the center of the city, from six till nine in the evening, and then eating ices in a neighboring garden an hour or two longer. We went to the park on Sunday evening. Two thousand persons were present, chiefly young ladies and gentlemen. The gentlemen were dressed in the very latest Paris fashions, and the robes of the ladies glinted among the trees like so many snowflakes. The multitude moved round and round the park in a great procession. The bands played, and so did the fountains; the moon and the gas lamps lit up the scene, and altogether it was a brilliant and an animated picture. I scanned every female face that passed, and it seemed to me that all were handsome. I never saw such a freshet of loveliness before. I did not see how a man of only ordinary decision of character could marry here, because before he could get his mind made up he would fall in love with somebody else.

The Priests of Genoa

I have not been to church so often in a long time as I have in the last few weeks. The people in these old lands seem to make churches their specialty. Especially does this seem to be the case with the citizens of Genoa. I think there is a church every three or four hundred yards all over town. The streets are sprinkled from end to end with shovel-hatted, long-robed, well-fed priests, and the church bells by dozens are pealing all the day long, nearly. Every now and then one comes across a friar of orders gray, with shaven head, long, coarse robe, rope girdle and beads, and with feet cased in sandals or entirely bare. These worthies suffer in the flesh and do penance all their lives, I suppose, but they look like consummate famine-breeders. They are all fat and serene.

We have visited several of the palaces—immense thick-walled piles, with great stone staircases, tesselated marble pavements on the floors, (sometimes they make a mosaic work, of intricate designs, wrought in pebbles or little fragments of marble laid in cement,) and grand salons hung with pictures by Rubens, Guido, Titian, Paul Veronese, and so on, and portraits of heads of the family, in plumed helmets and gallant coats of mail, and patrician ladies in stunning costumes of centuries ago. But, of course, the folks were all out in the country for the summer, and might not have known enough to ask us to dinner if they had been at home, and so all the grand empty salons, with their resounding pavements, their grim pictures of dead ancestors, and tattered banners with the dust of bygone centuries upon them, seemed to brood solemnly of death and the grave, and our spirits ebbed away, and our cheerfulness passed from us. We never went up to the eleventh story. We always began to suspect ghosts. There was always an undertaker-looking servant along, too, who handed us a program, pointed to the picture that began the list of the salon he was in, and then stood stiff and stark and unsmiling in his petrified livery till we were ready to move on to the next chamber, whereupon he marched sadly ahead and took up another malignantly respectful position as before. I wasted so much time praying that the roof would fall in on these dispiriting flunkies that I had but little left to bestow upon palace and pictures.