Magnanimous Florence! Her jewelry marts are filled with artists in mosaic. Florentine mosaics are the choicest in all the world. Florence loves to have that said. Florence is proud of it. Florence would foster this specialty of hers. She is grateful to the artists that bring to her this high credit and fill her coffers with foreign money, and so she encourages them with pensions. With pensions! Think of the lavishness of it. She knows that people who piece together the beautiful trifles die early, because the labor is so confining, and so exhausting to hand and brain, and so she has decreed that all these people who reach the age of sixty shall have a pension after that! I have not heard that any of them have called for their dividends yet. One man did fight along till he was sixty, and started after his pension, but it appeared that there had been a mistake of a year in his family record, and so he gave it up and died.
These artists will take particles of stone or glass no larger than a mustard seed, and piece them together on a sleeve button or a shirt stud, so smoothly and with such nice adjustment of the delicate shades of color the pieces bear, as to form a pigmy rose with stem, thorn, leaves, petals complete, and all as softly and as truthfully tinted as though Nature had builded it herself. They will counterfeit a fly, or a high-toned bug, or the ruined Coliseum, within the cramped circle of a breastpin, and do it so deftly and so neatly that any man might think a master painted it. 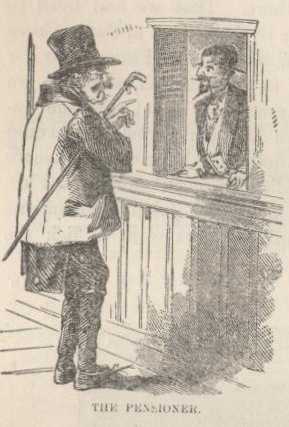 I saw a little table in the great mosaic school in Florence--a little trifle of a centre table--whose top was made of some sort of precious polished stone, and in the stone was inlaid the figure of a flute, with bell-mouth and a mazy complication of keys. No painting in the world could have been softer or richer; no shading out of one tint into another could have been more perfect; no work of art of any kind could have been more faultless than this flute, and yet to count the multitude of little fragments of stone of which they swore it was formed would bankrupt any man’s arithmetic! I do not think one could have seen where two particles joined each other with eyes of ordinary shrewdness. Certainly we could detect no such blemish. This table-top cost the labor of one man for ten long years, so they said, and it was for sale for thirty-five thousand dollars.
(Innocents Abroad)