Stagecoach Over the Rockies 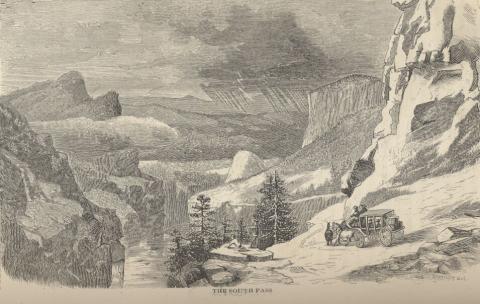 The mountain region westward of the sage and saleratus desert, extending between the 105th and 111th meridian (G) - a little more than 400 miles - will in time become sparsely peopled. Though in many parts arid and sterile, dreary and desolate, the long bunch grass (Festuca), the short curly buffalo grass (Siskria dactyloides), the mesquit grass (Stipa spata) and the Gramma, or rather as it should be called “Gamma” grass (Chondrosium faenum) which clothe the slopes west of Fort Laramie, will enable it to rear an abundance of stock. The fertile valleys, according to Lieutenant Warren, “furnish the means of raising sufficient quantities of grain and vegetables for the use of the inhabitants, and beautiful healthy and desirable locations for their homes. The remarkable freedom here from sickness is one of the attractive features of the region, and will in this respect go far to compensate the settler from the Mississippi Valley for his loss in the smaller amount of products that can be taken from the soil. The great want of suitable building material, which now so seriously retards the growth of the West will not be felt there.” The heights of the Rocky Mountains rise abruptly from 1,000 to 6,000 feet over the lowest known passes, computed by the Pacific Rail road surveyors to vary from 4,000 to 10,000 feet above sea level. The two chains forming the eastern and western rims of the Rocky Mountain basin, have the greatest elevation, walling in as it were the other sub ranges.

There is a popular idea that the western slope of the Rocky Mountains is smooth and regular; on the contrary, the land is rougher, and the ground is more complicated than on the eastern declivities. From the summit of the Wasach range to the eastern foot of the Sierra Nevada, the whole region with exceptions, is a howling wilderness, the sole or bed of an inland sweetwater sea, now shrunk into its remnants - the Great Salt and the Utah Lakes. Nothing can be more monotonous than its regular succession of high grisly hills, cut perpendicularly by rough and rocky ravines, and separating bare and barren plains. From the seaward base of the Sierra Nevada to the Pacific - California - the slope is easy, and the land is pleasant, fertile and populous. (p 7-8)

After dinner we climbed to the yellow pines. This afternoon passed, near La Pierelle station, the little canon in which the Express rider was last night when a bullet from Indians on the side of the road passed through his coat. About 2½ hours before the station keeper at La Parelle had fired four times at one Indian. At noon we passed a Mormon train 33 wagons long. They were nooning.

Platte Bridge to the Sweetwater

From Orion: Friday, Aug. 2.—3 o’clock, A. M., passed over North Platte bridge, 760 miles from St. Joseph. 2 P. M., reached “Sweet water” creek, “Independence Rock,” the “Devil’s Gap,” the “Cold Spring,” an ice water spring, issuing near one of the Stations,. Now, or at any time of the year, the men at this Station by scraping off the soil, sometimes only to the depth of six inches, can cut out pretty, clear, square blocks of ice. This “cold spring” is 36 miles from “Independence Rock,” and 847 miles from St. Joseph.

Up The Sweetwater River Valley

In the night we sailed by a most notable curiosity, and one we had been hearing a good deal about for a day or two, and were suffering to see. This was what might be called a natural ice-house. It was August, now, and sweltering weather in the daytime, yet at one of the stations the men could scape the soil on the hill-side under the lee of a range of boulders, and at a depth of six inches cut out pure blocks of ice—hard, compactly frozen, and clear as crystal! (Roughing It)

Over the Wasach and Into Salt Lake City

From Orion: 4 P. M., arrived on the summit of “Big mountain,” 15 miles from Salt Lake City, when the most gorgeous view of mountain peaks yet encountered, burst on our sight.